I have been making a big effort to use my sketchbooks whilst away from home and when studying. Using the sketchbook is difficult everyday for me with work commitments but I will continue to find a routine where this is possible.

During my recent trips to Europe and Bolivia, I made several rapid sketches in a small pocket sketchbook (which I love) – occasionally also using my A5 sketchbook as well.

I have been using a papermate ballpoint pen and a Faber Castell propelling HB pencil with rubber which I find very convenient when travelling.

La Paz Bolivia has many features to draw/paint but the altitude (aprox. 4.000m – 12,000ft above sea level) is oppresive!

My plane was delayed due to fog on my return journey so I was able to make many rapid sketches of the people also waiting in the airport:

I enjoy sketching people and street corners – particularly where movement, transport etc is concerned – I have also noted that I like street signs, traffic lights, directions etc – perhaps a connection to my travels which I started at the age of just 18 visiting all corners of the earth – something that I have never really stopped!

In this exercise I used a stainless steel coffee pot and a silver morrocan teapot. Whilst both surfaces were reflective they were not that interesting in terms of reflections/reflected light. The forms however were quite different in that the coffee pot was a modern design and the teapot a more traditional ornamental one.

I used a new heavy 250g mixed media A2 sketch pad from Daler Rowney. As per the exercise instructions the drawing was made using charcoal and a putty rubber.

In the first drawing I used compressed charcoal and found the exercise extremely difficult – the forms worked out ok but I feel that I did not represent the reflective surfaces very well…possibly due to the choice of objects or lack of detail in my drawing/mark making.

I did however like my rendering of the teapot: the handle, spout and feet and the introduction of patterning on the surfaces. I believe that the highlights were not successful and used a white charcoal on top of the black which turned out grey! This was possibly because I should have fixed first.

As I was not entirely pleased with this drawing I made a further study – this time with willow and compressed charcoal, a large paper stump and a putty rubber. I also changed the position of the objects to try and improve reflections between the two surfaces. 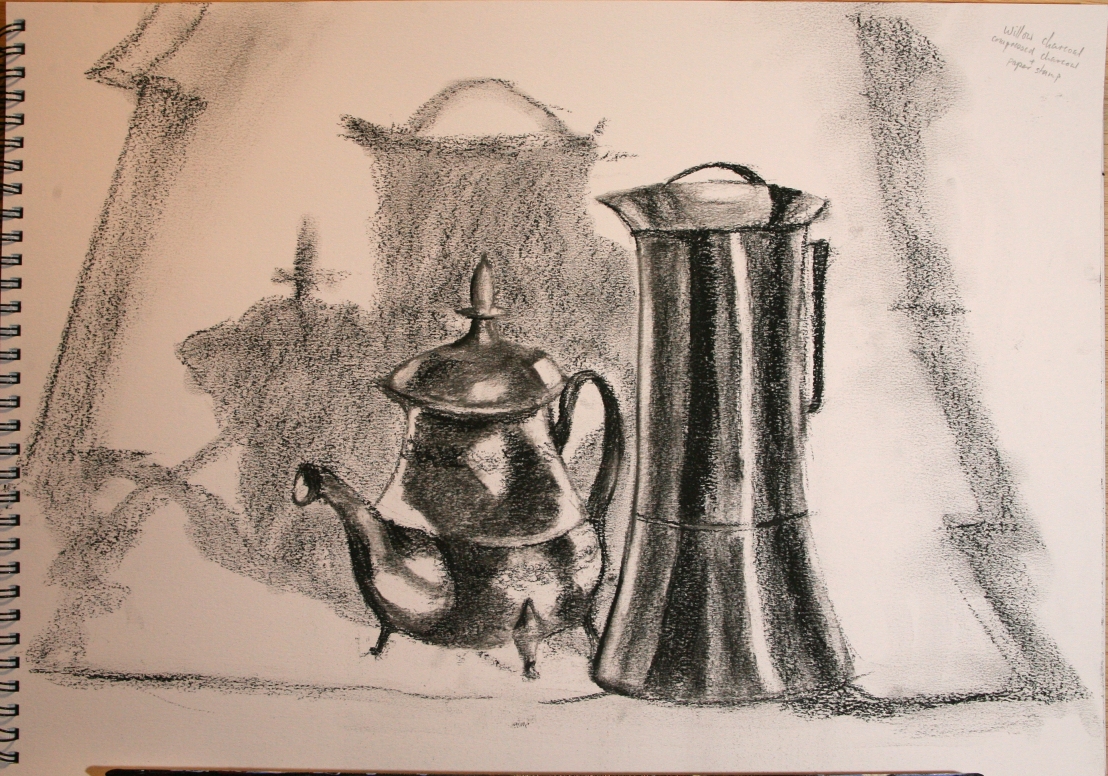 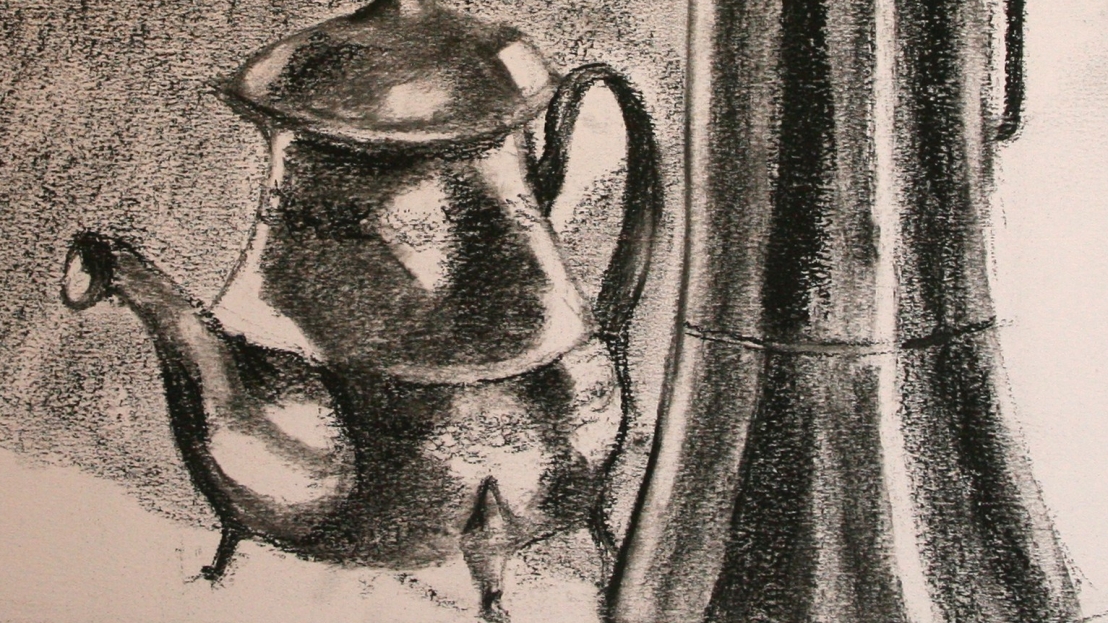 The use of the paper stump  and the richness of the marks made with the willow charcoal helped this time, and made a significant difference to the rendering of reflections and the range of light and dark in this drawing. I was also much more successful in making highlights with the rubber without resorting to the use of white charcoal. I need to be more aware of my mark making as in this drawing there was less variation compared to my first attempt.

Obviously I need more practice in the rendering of reflective surfaces in charcoal!

Upon reveiwing my work and the rendering of primary/secondary reflected light – I am aware of the meaning and the visual effects created but have not as yet been succesful in demonstrating this adequately enough in my work. The nearest to it is the second drawing above – where in the teapot surface you can see the reflected effects of the coffee pot.

Odilon Redon (1840-1916) initially worked in black and white using a variety of charcoal, oiled charcoal, black and white chalk, and black pastel in which he was able to produce very atmostpheric, mystical, symbolist drawings on both white and prepared tinted papers. This selection of media enabled him to produce a full range of tones using the atmostpheric contrast of deep darks and very light areas to create tension and mood.

Two of his works that struck me most were both entitled The Apparition:

Apparition (Pencil on paper) Bridgeman Image no. CH825768. Beautifully drawn with large variety of crosshatching and line to produce the ghostly figure.

Another drawing that I liked very much was:

I believe that he also used coloured papers to further enhance the atmostpherics /mood of his dark images – such as the image in the course notes:

After completing Exercise 4 – Shadows and reflected light, I experimented with two rapidly drawn sketches using a prepared background of acrylic paint in my A2 sketchpad – one in Ultramarine dark, the other in yellow ocre (a similar colour to Redon’s Two Trees). I found that the yellow ocre was more effective in changing the mood to a more nostalgic/antique feel:

The power of Redon`s images were not because of his strange and macabre subject matter because much was considered to be old fashioned and unoriginal, but they depended on his great range of visual effects of which he was a master. Even when limited to a monochrome palette, he exploited to the full the effects of line, texture, and tone to impart resonance, mystery and atmostpherics to his subjects. It was in this technical mastery that he was ahead of his time.

This exercise I practiced whilst travelling so was working with limited resources. I first practiced mark making using pencil, a fineliner and biro.

I enjoyed experimenteing with the mark making and will need to continue this with a wider variety of materials/media.

I then started drawing objects with shadows from memory: 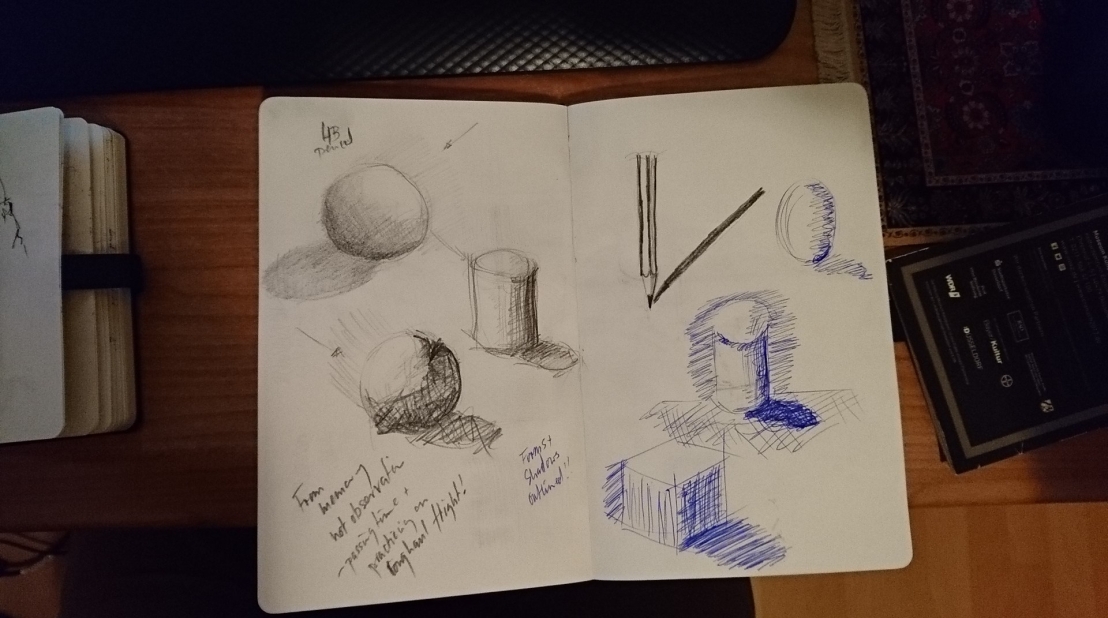 Some of my drawings have included unnecessary lines!

I need to practice more in my sketchbooks using different types of marks and media to create shadows. I will continue to do this.

I enjoyed using the biro and soft pencil 4B-6B

Ever since the age of 14, I wanted to study art at degree level. With many of the obstacles of life now behind me and a stubborn will to complete this Painting Course, I wish to continue on the path that will lead me to a become a professional painter. This Blog will track my progress through all the modules and exercises – documenting this dream come true!